Sometime ago I had a chance to visit Oklahoma City. I had traveled up from Dallas on I-35. Where it crosses I-40, Oklahoma City territory spreads northwestwards. I stayed in a hotel with the auspicious name „Saddleback Inn“. And true to its name, it was occupied by horse traders, among others. Folks met in the hotel bar in the evening and sang country songs by a Karaoke screen, just as I had imagined. But my trip to Oklahoma City also opened me up to a new perspective on the state capital, away from the clichés.

True, in November 2016 the state of Oklahoma gave Donald Trump a two-thirds majority, a red state among the red states of the central U.S.  And the fate of the Okies in California, as immortalized in John Steinbeck’s „The Grapes of Wrath“ and a „must“ in my high school English class in Germany, had confined my prejudice of a poor, conservative mid-western state. But apart from some stretches of crumbling interstates around the city (my American friends were not so much amused when I compared them to the old autobahns of East Germany), Oklahoma City convinced me as a modern, well planned and maintained metropolis, at least as much as downtown areas did illustrate.

A point to prove is a visit to Bricktown. The former warehouse district, in the southeast corner of the city, delimited by I-40 to the south and by I-235 in the east, borders right on downtown. It „was Oklahoma City’s first warehouse and distribution district. Founded just days after the Land Run of 1889, Bricktown was a central hub for the state and country, connecting via railroad, and later, major interstate highways. It was an area full of diverse activity, housing furniture and hardware stores, a biscuit company, a dairy, cotton producers, wholesale grocers and even a school. Bricktown began to decline in the 1960s and 70s as Urban Renewal took hold and industry and residents began to move further out of the central city. The area became nearly vacant as buildings became dilapidated or were torn down. After decades of decline, investors and other forward-thinkers started to show renewed interest in Bricktown. They purchased buildings, began renovations, recruited retail, restaurants, and attractions, and started to advocate publicly for the district.“ (quoted from the Bricktown website). One hardly would expect such a concerted private public partnership of urban renewal in the most „Republican“ part of the United States. A ballpark, shops, bars, restaurants and an artificial waterway – somehow surprising in the flat, dry plains of the Midwest – make a suitable ensemble to spend evenings or weekends. 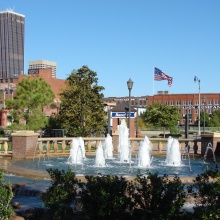 Oklahoma City was made infamous by a terror attack on a federal building in April 1995. A car bomb destroyed the Murrah Federal Building and killed 168 people in it. Today, a museum and a memorial mark the site of the bombing. The catastrophe of 1995 remains a scar in the history of the city and a wound in its soul.

When a friend suggested to pay a visit to the National Cowboy & Western Heritage Museum, I was skeptical. The museum in a vast, modern building in the northern outskirts of OKC, just off I-44, was a complete surprise: an extensive documentation and exhibition center of life (and death), as it really was, leads the visitors through all aspects of day-to-day life in the pioneer settlements in the U.S. west. Including a reconstructed „Main Street“ of a western town (Prosperity Junction) at the of the 19th century. In an open court-yard visitors could test their skills in throwing a lasso (I failed miserably, my friend did not). The museum displays the concepts of modern museum design in the United States, with a mix of exhibition, documentation, and multi-media animation. I had seen already such museum concepts in the Holocaust Museum in Washington D.C. in the mid 1990ies or in the Sixth Floor Museum of the former Texas School Book Depository in Dallas. Meanwhile, these concepts have spread to Europe and make museum visits here much more interesting.

On my way up from Dallas I had hoped for a glimpse of a tornado (hopefully in the far distance), but it wasn’t the season (and I am not a storm chaser). Oklahoma City is located right in the middle of „Tornado Alley“ and has experienced its share of natural disasters.

The opening ceremony of the conference that I attended at the time of my visit included a commemoration to the „Trail of Tears“. In the 1830ies, Native Americans, among them Cherokees, were removed from their homelands in the southern Appalachians to an area west of the Mississippi in today’s Oklahoma. Native Americans in their traditional dresses marched into the auditorium. Looking back to that emotional ceremony, so alien to European „objectivity“, I can’t but feel that the cycle of history has moved on to the present incumbent of the White House, who has proudly declared his predecessor Andrew Jackson to his role model.